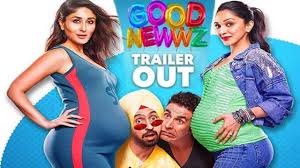 Good Newwz is an upcoming Indian Hindi-language comedy film about two couples who are trying to have a baby and everything else they go through and their tryst with in- vitro fertilisation, starring Akshay Kumar and Diljit Dosanjh as male lead whereas Kareena Kapoor Khan and Kiara Advani as female lead in the flick. The film is directed by debutant Raj Mehta and produced by Karan Johar, Apoorva Mehta, Hiroo Yash Johar, Shashank Khaitan and Aruna Bhatia under their respective banners Dharma Productions of Karan Johar and Cape of Good Films of Akshay Kumar.

Shooting for the movie started in November 2018 and was completed in April 2019. It is scheduled to be released in India on 27 December 2019.

Akshay Kumar has finally shared the first posters of his next film, Good Newwz, calling it the goof-up of the year. He and Diljit Dosanjh are seen squeezed between the baby bumps of two pregnant women on the posters. Akshay shared his hilarious poster on Twitter with the caption, “Squeezing in some #GoodNewwz for you this #Christmas season. Stay tuned, the biggest goof-up of the year is coming!” The film stars Kareena Kapoor and Kiara Advani and the baby bumps are expected to be of the two actors. While the woman on the left is in a bodycon dress and is wearing a beaded bracelet, the other woman is in a top and denims and has a huge diamond on her ring finger.

The trailer opens to Khan and Kumar, Deepti and Varun Batra, at the doctor’s hospital, discussing the frequency of their sex lives, which then transitions to a montage of the couple sneaking away on multiple occasions. Dosanjh (Honey) and Advani (Monika), a flashy Punjabi couple, also coincidentally share the same last name, which leads to the mix up at the hospital. The cast is joined by Adil Hussain and Tisca Chopra in supporting roles.

Tanishk Bagchi has written lyrics of the songs – ‘Chandigah Mein’ and ‘Laal Gaghra’ along with Badshah and Herbie Sahara respectively. The other two songs – ‘Sauda Khara Khara’ and ‘Maana Dil’ is penned down by Kumaar and Rashmi Virag. “Dil Na Jaaneya” is written by Gurpreet Saini, Ari Leff and Michael Pollock.